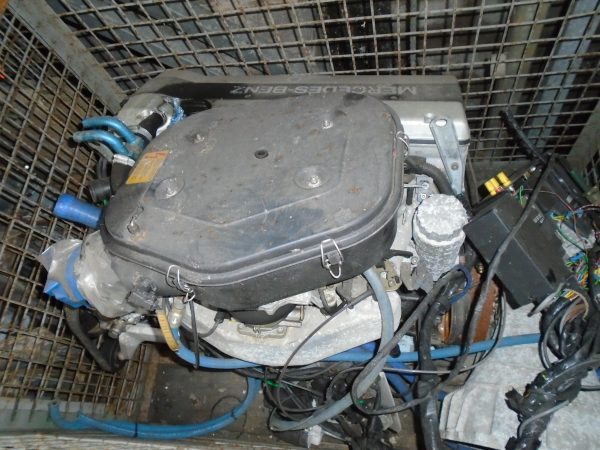 We bought two of these Mercedes Benz engines and matching gearboxes from a very well known oil producer in the 90s. The engines were originally purchased directly from Mercedes in crates. They were to be used as a test bench for proof testing oil. The first engine, we sold soon after acquiring. It had been used for testing for a short while but was in fully functional and running condition. This engine that we have for sale here was a surplus engine designated for oil proof testing that was prepared, but we were told, was never used for it’s intended purpose. It has testing related fittings and pipes installed but we believe this engine and gearbox to have never been run in anger and it has certainly never been in a vehicle. We were told it was their backup unit in case the original suffered a malfunction, but was never required. You will definitely need to perform a major service and lots of remedial work to replace the pipework, belts, electrics, and maybe more too. We have not seen inside this engine so can’t verify any of these claims. Viewing absolutely essential.

The engine also includes a stand-alone independent ECU that was to be used for the testing process while on a bench. See photos.

Due to the nature of this unique listing we insist on a viewing in person before considering any sale.

We are only in the office:

We aim to answer emails as quickly as possible. Email is the best method of contacting us non-urgently.
Email: info@cabmasters.com

Due to our semi-rural location and stone warehouse full of metal parts, the mobile signal is frequently weak/off entirely. We have alternative numbers on two different mobile networks to help reduce the impact of this. We do also frequently switch these between primary and secondary use depending on how well they are performing.
Current Alternative Mobile: 07366653522
Current Primary Mobile: 07976376010